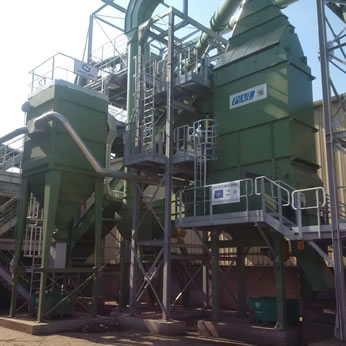 The Preparatory Actions, including “Stakeholders consultations” and “CARWASTE plant modelling and lay-out” have been successfully concluded in 2015.

The Implementation Actions, including “Installation of the units and construction of the prototype pilot plant” and “Demonstration, data analysis and optimization” have been successfully concluded respectively at the end of 2015 and at the end of 2017.

All the channels have been used in order to disseminate the project and its results (exhibitions, workshops, brochures, newsletters, technical publications, and a dedicated website).

Action ID and title: B2 – Demonstration, data analysis and optimization
This action started at the beginning of 2016.
Many tests have been carried out in order to demonstrate the feasibility and sustainability of the pilot plant. Tests of the whole pilot plant have been scheduled via two main cycles:
- Tests for the pilot plant set up.
- Test with the pilot plant working at full of its demonstrative capacity.
The results of these tests served to improve the performance of the pilot plant, and to solve some issues occurred during the testing phase. The main change implemented has been the replacement of the fan that happened in July 2017. This modification permitted to improve the repartition between light and heavy fractions.
During the following months, GDE performed some other modifications to the plant, launched some chemical analysis on pellets and did some tests on fluff and on metals.
The various tests showed that only the materials processed by the Carwaste process could find a value chain. These materials had also a quality such that they could come in direct substitution of raw materials used as fuels.
Thanks to the different stages of sorting and separation carried out, we were able to recover:
- About 90% of metals present in the heavy fraction coming from CARWASTE
- About 47% of plastics present in the heavy fraction coming from CARWASTE
It should be noted that the other plastics could not be recovered because being composed of other families than the PP/PE or PS/ABS or containing a charge rate too strong to allow their good valorization.

Action ID and title: B1 – Installation of the units and Construction of the prototype pilot plant
This action has been successfully concluded before the end of 2015.
The activity involved all those steps necessary for the effective and powerful integration of the units and the accessory components at GDE premises (Rocquancourt, France).
In this period, PAL manufactured:
- FDN. 1500x1500: a filtering rotary valve to separate material from air;
- CC.2.100/220: a centrifugal machine to eliminate the metallic pollutants;
- Airgrader 4,5M: to extract a very clean fluff;
- Cyclone: to discharge the fine material separated from the fluff sucked in the filter;
- Airgrader piping, feeder (fittings);
- Belt conveyor.

In July 2015, GDE received from PAL the material of the first part of Life project, and the preliminary work was done:
- Set-up of the conveyors;
- Set-up of the steel work structure for the rotary valves;
- Modification of some parts of the actual process in order to facilitate the work during the production stop.
In November 2015, PAL concluded all the deliveries of the machines.

In December 2015 and January 2016, the Consortium concluded the construction of the steel work structure, the cable laying, the erection of the conveyor, and the wiring. In the same period, a dry test of the complete pilot plant was carried out.

Action ID and title: A2 – CARWASTE plant modelling and lay-out
After receiving the drawings of the building and the external area where the pilot plant should have been installed, PAL performed the final flow-sheet and lay-out of the pilot plant.
After a meeting in Rocquancourt between PAL and GDE, some important modification were taken into account. The main modification consisted in another filtering rotary valve at the end of GDE’s foam pneumatic system in order to remove the maximum dust. This additional step has been added on the lay-out, and the drawings have been modified.
GDE worked also in April and May 2015 in order to provide further optimization to the model and lay-out, according to the feedback received from internal analysis and suppliers. At the end of May, the global lay-out was validated and the consultation of the potential suppliers was closed. In July the consultation was in progress concerning other suppliers, in particular the electrical and air connections ones. The steel work structure and the first filter rotary valve were set up in August.
After this point, some differences were still present between the drawings of PAL and the implementation of the project, thus in September another meeting was arranged in Rocquancourt. After that meeting, PAL and GDE modified in accordance their versions.
This action has been successfully concluded in September 2015. The design took more time than expected, but the pilot plant has been constructed on time, thanks to additional efforts and efficiency during the call for tenders and the preparation of the construction.

Action ID and title: A1 – Stakeholders consultation
Both partners collaborated to prepare the list of the potential stakeholders and the questionnaire.
GDE identified and contacted about 150 potentials stakeholders, distributed in cements works, steelworks plants, heating plants (burners, boilers, generators). PAL sent to GDE some contacts of cement plants and thermal power plants in Italy. The list of the stakeholders has been continuously updated thanks to exhibitions, conferences, website, interview, questionnaires, etc.
The questionnaire was produced in English, French and Italian. All the above mentioned stakeholders received information regarding the project and the questionnaire, and their replies have been collected in the filled forms.
This significant information has been considered sufficient to allow the CARWASTE technical team to figure out and refine future market uptake and fine-tune the project achievements.