With the help of T2i Trasferimento Tecnologico e Innovazione (http://www.t2i.it/), which supports different kind of companies or multinationals in research projects at international level, PAL organized the Final Conference of the Carwaste project, which was addressed to a specialized audience. It was held at T2i Trasferimento Tecnologico e Innovazione premises on 13/12/2017.
All the speeches of the Conference were closely related to the theme of recycling and of the environmental protection:

The Final Conference of the LIFE CARWASTE project “A novel and efficient sorting process for post-shredder ELVs to meet and overcome ELV directive targets” (LIFE13 ENV/IT/000185), co-founded by the EC, will be held on December 13, 2017 at “t2i - trasferimento tecnologico e innovazione” premises (Piazza delle Istituzioni 34/A, Treviso).
LIFE CARWASTE main objective was to demonstrate the feasibility of a pilot plant able to finely separate shredded car waste currently land filled in order to recover and recycle it in cement plants and steelworks.

During the Conference, in addition to the presentation of the results achieved by the LIFE CARWASTE, other important issues related to the waste recycling will be discussed.

To join the event you need to subscribe to the following link: www.t2i.it/eventi 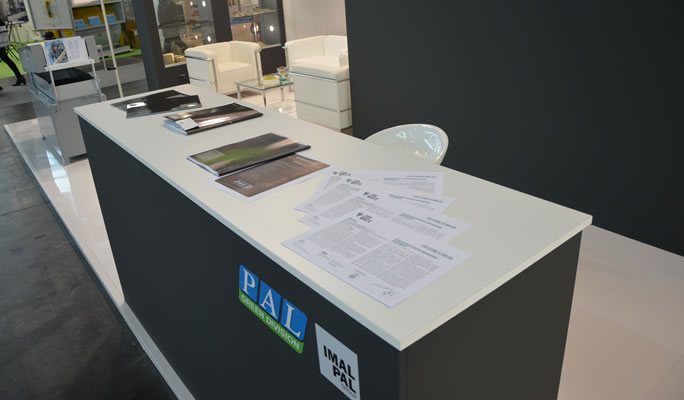 Ecomondo is the leading Euro-Mediterranean area green and circular economy expo. An international event with an innovative format that brings together all sectors of the circular economy in a single platform: from material and energy recovery to sustainable development.

Running at the same time as Ecomondo is Key Energy, the expo of “energy for the climate”, energy-efficiency solutions and applications and renewable energy.

Since 2009, Ecomondo has also offered an ideal model of the Città Sostenibile (Sustainable City), in an exhibition space demonstrating models of urbanisation, technological solutions, projects, and mobility schemes that permit improvements in the population’s quality of life and promote sustainable territorial development.

Italy is among the leading countries in Europe in the green and circular economy, in particular in energy efficiency, waste recycling and resource productivity. For this reason, Ecomondo is a reference point in the international panorama, where all the leading companies of the sector can meet and discover the trends, innovations and new technologies and exchange views with sector professionals.

To read more about the event: www.ecomondo.com 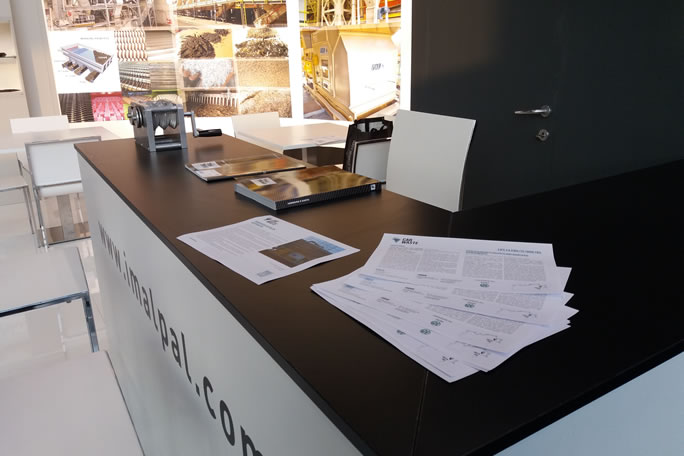 The project LIFE13 ENV/IT/000559 AUTOPLAST aims at recovering plastic material coming from the automotive sector, especially for tanks.
By its nature, during its lifetime this particular type of waste absorbs a certain quantity of hydrocarbons, making the activities of recovering and re-using of the recycled material problematic, for these reasons:
• Superficial flaws on the finished product
• Permanence of hydrocarbons odour
Together with CAUTO and CSMT and supported by the municipality of Vobarno and the Faculty of Engineering of the University of Brescia, Valsir has created a specific patented treatment able to facilitate the reusing of the material and to limit the abovementioned problems.

The project aims at developing a system for the recovery of plastic waste from the automotive sector thorough the realization of a pilot recycling plant, as well as the development of a network for a selective collection, to be carried out in the Province of Brescia.
The specific objectives of the project are the following:
• Recovery of plastic material coming from tanks
• Construction and start-up of an industrial plant for transformation of the collected plastic waste in reusable material
• Development and organization of a supply chain in the Province of Brescia
• Active involvement of a social cooperative in the activities of recovery, selection and separation of decommissioned components
• Use of the regenerated granules in percentages higher than the current situation and with a reduction in the use of virgin raw materials and a reduction of CO2 emissions into the environment.

The project will demonstrate the effectiveness of the innovative recycling system through a pilot application in Valsir and in parallel it will develop a model for micro-collection network as supply chain for the plant.

Work generation
The recycling of the materials hereby described should make it possible to expand the traditional waste catchment area of breaker’s yard and collection centers. This enlargement consists in the creation of a widespread collection network, to be held at car bodyworks, thus avoiding the disposal at landfills or Waste-to-Energy plants.

Reduction of atmospheric emissions
According to easily available and widely documented estimates, each kg of recycled plastics is expected to lead to the saving of 1,5 kg of CO2. Considering that, when fully operational, the separation and recycling plant hereby described could process approximately 1.500 kg per hour of input material, it is clear that a project of this magnitude could have a significant impact on the environment. Considering, at full productivity, a 24 hours continuous cycle for 300 days a year, the reduction of CO2 atmospheric emissions is expected to be equal to 13.000 tons a year. It is expected that the industrial plant hereby described will make it possible to process a quantity of material of approximately 200 tons a year during the pilot project. The system may than be used for the recovery of other components related not only to the automotive industry, but also items connected to other sectors, such as packaging materials, big bags, tanks, bottles, pipes etc. 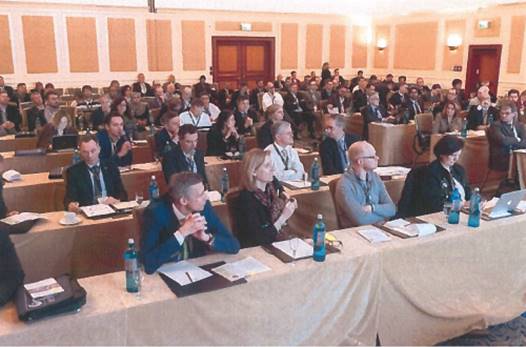 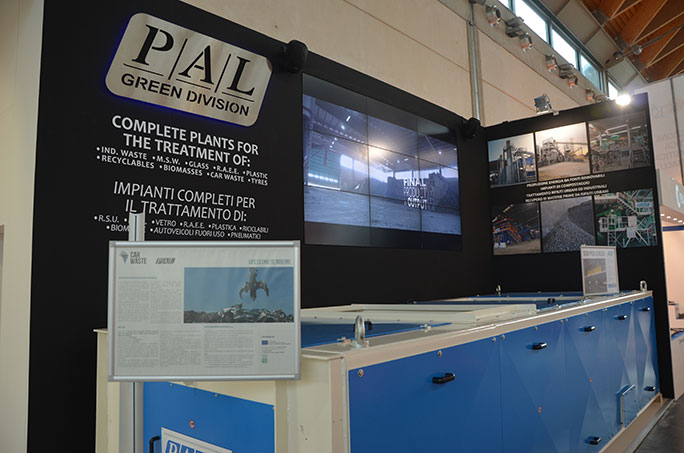 To read more about the event: en.ecomondo.com 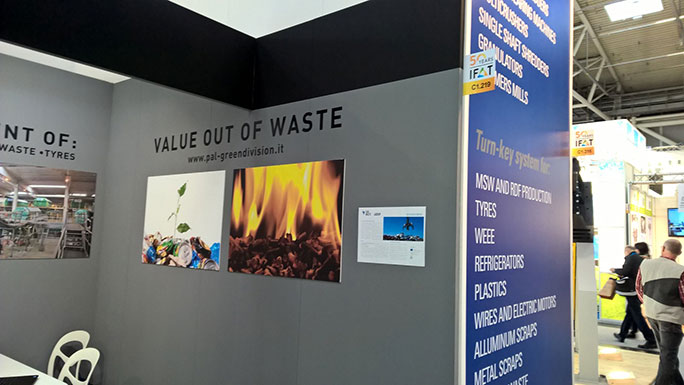 The Pilot Plant installation is concluded

The integration of units and accessory components at GDE premises has been done. See Progress Section for more details. 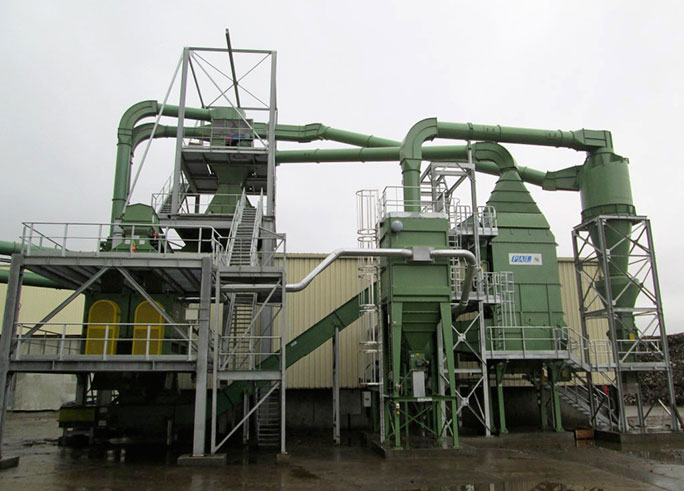 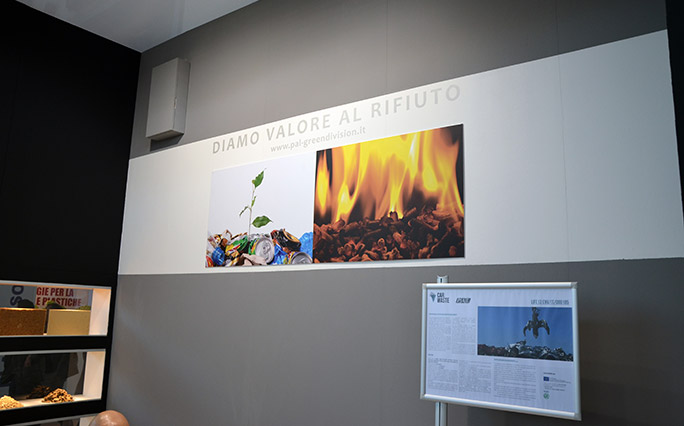 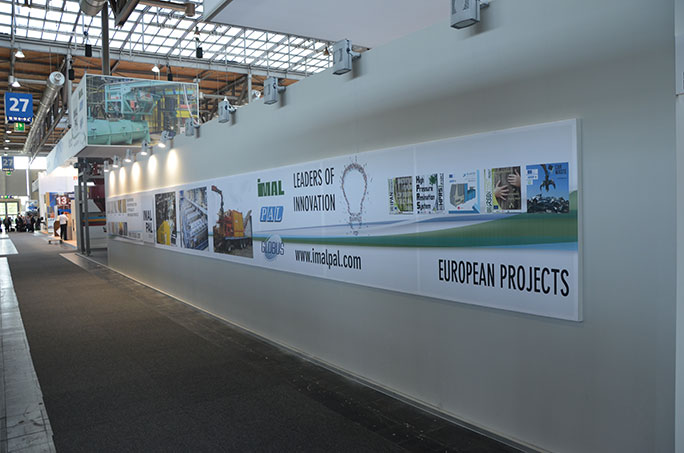 At FIMMA exhibition the PAL presented the innovative project which has been co-funded by the European Union under the LIFE+. 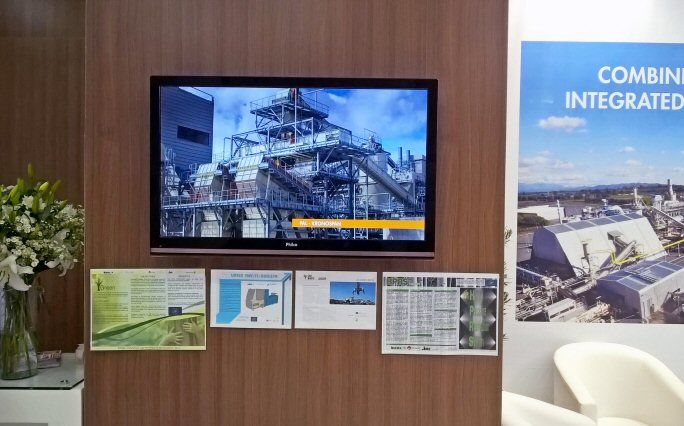 At Woodmac China exhibition the PAL presented the innovative project which has been co-funded by the European Union under the LIFE+. 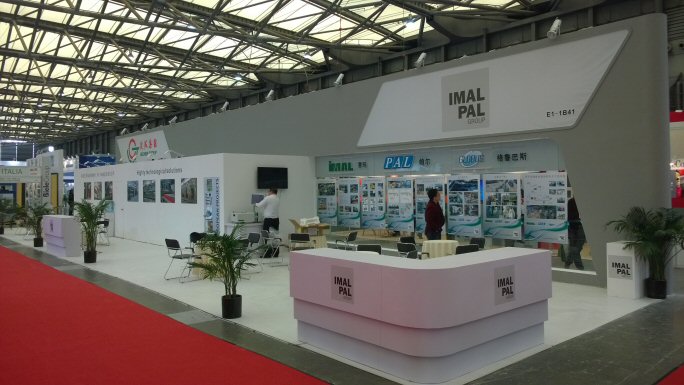 On 21st November 2014 a conference was held at the Pal S.r.l. ‘s seat with the theme “The technological innovation projects in Italian companies and the European funding: two key factors to the success of the Made-in-Italy brand”. The event was attended by a great number of participants. In fact, many stakeholders were involved: technical institutes, businessmen, political authorities as well as individuals interested in the projects. During the conference, the LIFE+ projects were explained with the aim at increasing the awareness of environmental issues and demonstrating how synergy among different entities may lead to the attainment of important goals. Besides others, the event was attended by:

The discussion focused on potentials for innovation in the metalworking and mechanical engineering sector and on access to European funds. After the event, many articles were published on the main local newspapers that raised awareness among public opinion on environmental themes and illustrated at the same time the features of the Community research programmes. 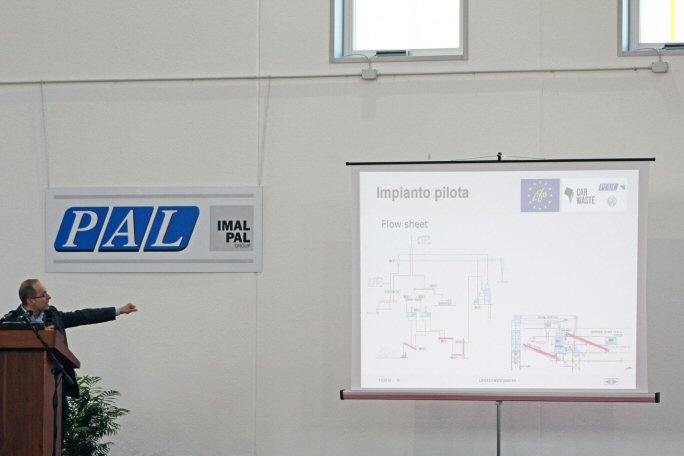 OPEN DAY AT PAL
PRESENTATION OF THE LIFE PROJECTS

Political personalities will join the event while many technical experts will analyze the projects and a space will be available for open discussion with the public.

At Ecomondo exhibition the PAL presented the innovative project which has been co-funded by the European Union under the LIFE+.

KICK OFF MEETING OF LIFE+ PROJECTS 2013

On 28th October 2014 Dr. Giuseppe Pinese - Project Coordinator, and Dr. Manuel Darin - Assistant Project Manager, attended to Kick-Off meeting which was held in Rome for the Italian launch of projects that have received Community funding in the framework of Call 2013. The meeting was attended by officials of the Directorate General Environment of the European Commission, the National Focal Point, part of the Monitoring Team Astral-Timesis and beneficiaries of the Italian projects that have been selected.